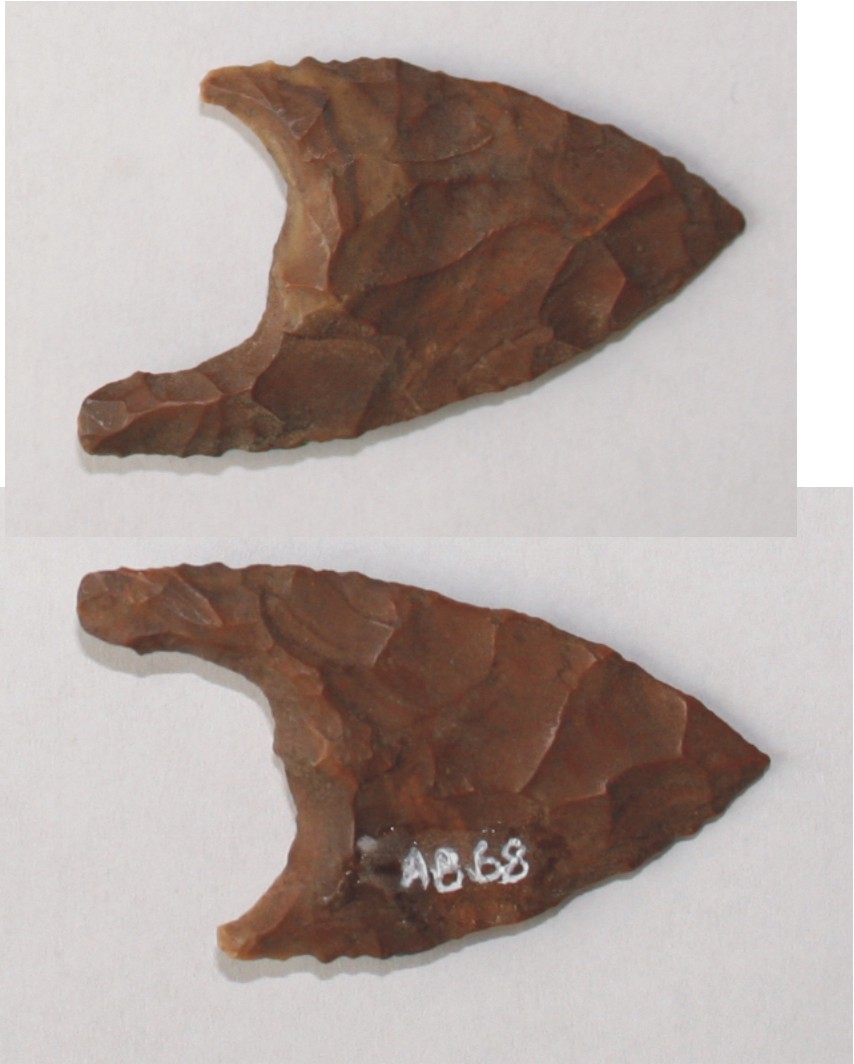 Licensing details
This image may be used under a Creative Commons Attribution-NonCommercial-ShareAlike 4.0 International (CC BY-NC-SA 4.0) license. For uses not covered under the Creative Commons license, or to license images for commercial uses, please contact the Egypt Centre.

A flint arrowhead, bifacially worked, with one wing. It was a gift from the University of Wales, Aberystwyth. This type of arrowhead is sometimes called a Fayum Point, a concave based arrowhead, or a hollow based arrowhead. Most of the examples in the Egypt Centre have one of the wings broken off. The type is bifacially made and the 'wings' or barbs, resulting from the depth of the hollow base, vary in length. A similar winged type was found at Site H in Wadi Ghazzeh in the Gaza strip (MacDonald 1932, pls. 20.15, 23.31, cited in Rizkana & Seeher 1988, 33). Whether these were made in Egypt or not is unclear. The earliest of the type appear in the Bashendi A layers at Dakhleh (5700–5000 BCE; McDonald 1999, 268). They appear in the Fayum Neolithic (Neolithic A) around 4500 BCE and at the same time at Merimde (Rizkana & Seeher 1988, 33). They continue until Badarian and Naqada I times (4000–3500 BCE). Although they are often called 'Fayum Points' they also occur in Upper Egypt, for example at Mostagedda (Brunton 1937) and Badari (Brunton & Caton-Thompson 1928). It is unclear if they continue until Naqada II times (3500–3100 BCE). Other sites where concave base arrowheads have been found include: Armant (Mond & Myers 1937, pl. 68.87), Hemamieh (Brunton 1928, pls. 83, 166, 167) and Naqada (Petrie & Quibell 1896, pl. 72.57–58). Neolithic types tend to be more finely made than the Predynastic types (Gilbert 2004, 51). At Merimde, Predynastic stouter ones were earlier than narrow long ones (Rizkana & Seeher 1988, 33). It has been debated as to whether or not one can see regional variations. Caton-Thompson and Gardner distinguished four different types from the Fayum (Caton-Thompson & Gardner 1934, 28). Hikade (2001) distinguishes between a Merimde point and the Fayum point. Rizkana and Seeher (1988, 33) state that at Maadi, Fayum, and Merimde triangular specimens with only slight hollows are found in the same contexts as others with very pronounced wings. Holmes (1989, 416) writes "a virtually infinite variety of concave base arrowheads is known from the Fayum, but for the Predynastic of Upper Egypt it has been useful to distinguish only two basic shapes: 'incurving barb form' and 'straight-sided elongated triangular form." While thIS example is likely an arrowhead, some of the larger types may well be spearheads. However, interestingly, large examples were found at Hierakonpolis Structure 07 and the excavator suggested that these may have been large because of their votive nature (http://www.archaeology.org/interactive/hierakonpolis/field07/6.html) The wings do not always seem to have acted as barbs. The fact that these are bifacial arrowheads rather than simpler transverse types suggests that they were not simply utilitarian. Even the smaller chunkier ones are made with more care than would be needed simply from a practical viewpoint. Thus, they probably also had symbolic importance, perhaps as a status marker.

Back | Feedback about this object